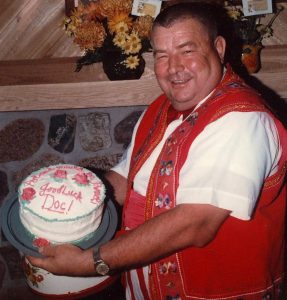 The building originally was constructed as a restaurant in 1978 by Doc Kliszcz, a popular local dentist who had long dreamed of opening a Polish eatery to showcase his culinary heritage. The formal name of the new establishment was Kliszcz’s Karczma (Polish for “rustic country inn”) but it soon came to be known locally as The Polish Palace. Current owner of the property, Bill Brakken, worked for Doc as a bartender the first year the original restaurant opened.

Sadly, Doc died a few years after opening his restaurant and the building went through several changes in ownership and use over the years. It last was operated as the Red Gate Inn, which closed in 2000.

Bill hadn’t been inside the building in more than 25 years when he happened to see it listed for sale in early 2005 and took a look on a nostalgic whim. He opened Cable Nature Lodge several months later in the upper level space once housing the various restaurants. Rookery Pub Fine Dining opened three years later in May of 2008 following a major renovation of the building’s previously unfinished lower level.

In the fall of 2021, a new chapter begins under new ownership as a sister company to Garmisch Inn.